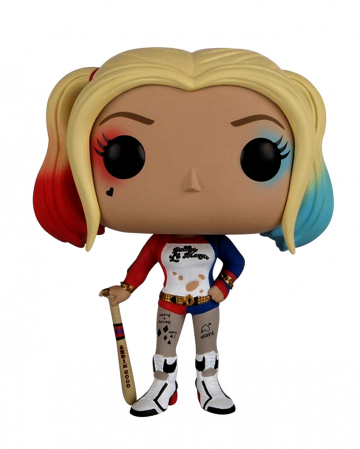 Licensed collector's figure from the hit movie around the nasty Joker

Harley Quinn has been a household name since the box-office hit "Suicide Squad" at the latest. The crazed criminal from the Batman movies is the lover of the nasty Joker, which is why she always helps him with his dark machinations - even if he doesn't return her love. Now it's time for all comic fans to order the Suicide Squad - Harley Quinn Funko POP! figure.

With the delivery you get the Suicide Squad - Harley Quinn Funko POP! figure made of 100% vinyl. Harley is about 10 cm tall and brings her famous baseball bat to you. In fine handwork the tattoos were faithfully painted on the original. Expand your super villain fan article collection with more characters like Leopard Jumpsuit CostumeFunko 5 Star Horror Vinyl Figure Jason Voorhees and Funko 5 Star Horror Vinyl Figure Pennywise.