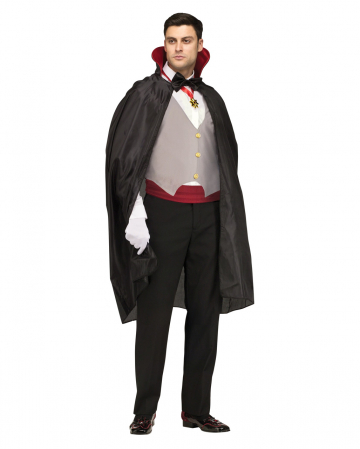 Dracula is synonymous with death, spreading fear and terror, and was first invented in 1897 by the Irish writer Bram Stoker Vampire.Nowadays Vampire popular characters in many mainstream films and television series and a very popular idea for the next carnival or Halloween costume.Most people now opt for the modern way of bloodsucker that Robert Patterson vampire who can be a bit pale, but still a normal guy seems to be.Even if we look through the Twilight vampire slightly different, most people think that the classic Dracula vampire costume, complete with a black and red cape, but more fun.

The Dracula vampire costume is one of the most popular panels and is always a popular choice in order to be haunted Halloween and carnival around the houses or the young ladies to fall around the neck of the carnival.Since Twilight has again breathed new life into the vampire movie and Robert Pattinson is the favorite of teenagers, a vampire costume should not be missing in the well-stocked wardrobe horror of course.Our Classic Dracula is the perfect and complete Dracula vampire costume for the bloodthirsty Count.The Dracula vampire costume set includes a black cape with red collar, gray vest, cummerbund, black bow tie, white gloves and a medallion.Better and faster is not to obtain a suitable carnival or Halloween costume.Fits to our Vampire Canines / Scarecrow Fangs and the Blood Capsules Film Quality in film quality for the realistic Dracula Bite Everlasting Kiss !