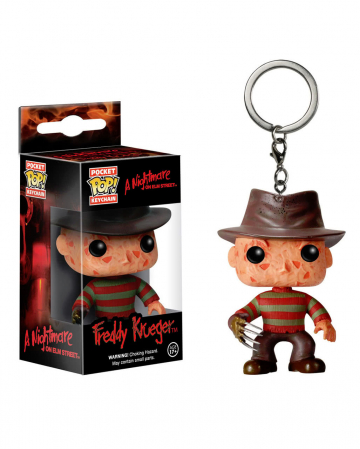 Item #: 27065
❤  Add to wish list
(0)
UnavailableOrder fast! Only a few items left Available
Fitting for this:
Add the product directly to your basket by clicking the checkbox

Gifts from Wes Craven's "A Nightmare on Elm Street"

Secure yourself with our Freddy Krueger Keychain POP a particularly lovingly designed keychain! The Lord of dreams as POP figure fits perfectly as a souvenir and a great gift idea for Christmas and birthdays.

Knappe 4cm is the horror film character Freddie Krueger, great as a figure in our keychains where it has a head width of 2.5 cm.Per lobster clasp a 2.5cm diameter large metal ring is attached to the can you hang your keys.The POP-figure itself corresponds in its design of the original film.A green-red striped sweater and the characteristic brown hat dress Freddy and even the striking hand is shown with silisierten metal claws.A must for all Nightmare on Elm Street fans! More ingenious keychains and giftware as the Jack Skellington Keychain POP and the Maleficent Keychain POP We have also in the horror shop.com!

Not recommended for children under 3 years.May contain small parts that could be swallowed - suffocation.