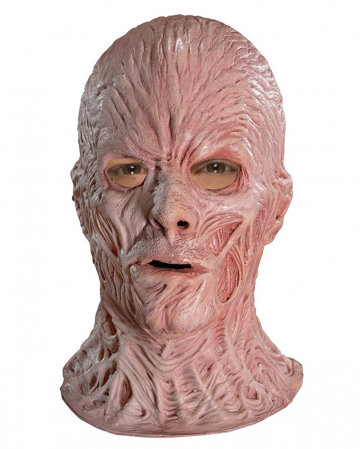 With our Freddy Krueger Mask Super DLX you can turn yourself into the slayer from Elm Street.

Freddy Krueger, aka the Springwood Slasher, from US blockbuster Nightmare on Elm Street is probably one of the most infamous serial killers of US cinema. The 2010 remake written by Wesley Strick brought Freddy back on the movie screens! Freddy's main characteristics are his disfigured features and his gruesome murder tool which he made himself from an old leather work glove, copper pipes and sharp steak knifes. The terrifying razor-sharp glove is Freddy's trademark and the reason why countless teenagers suffer from horrifying nightmares. In the 2010 remake, Jackie Earle Haley plays Freddy Krueger.

Officially licensed Freddy Krueger Mask Super DLX from the 2010 remake of A Nightmare on Elm Street. The latex mask looks like it was covered in burn scars and covers the head and neck.