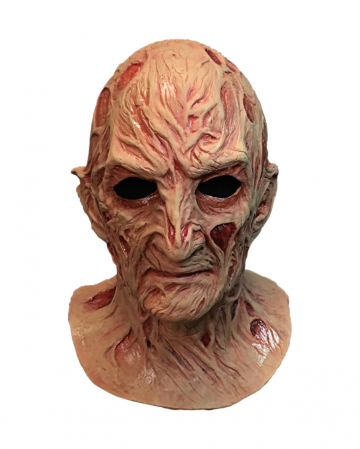 Item #: 39357
❤  Add to wish list
(0)
UnavailableOrder fast! Only a few items left Available
Fitting for this:
Add the product directly to your basket by clicking the checkbox

Transform into the "Dream Master" with our Freddy Krueger Mask Deluxe Nightmare 4! The high-quality Halloween mask from part 4 of the cult series "A Nightmare on Elm Street" by director Renny Harlin is guaranteed to scare the hell out of you on Halloween and at theme parties!

Clothes make the man, and that also applies to Halloween masks. For our Freddy Krueger Mask Deluxe Nightmare 4, hundreds of scene photos and original sketches were used as a basis to remodel the mask used in the movie. The result is an outstanding, deceptively real replica of the Freddy Krueger mask as worn by Robert Englund in Nightmare 4: The nasty burns as characteristics of the "King of Nightmares" can be found as detailed in our costume accessory as the facial features, which are clearly visible despite the burns and make the Freddy mask look like it was cut from the face! Carefully designed cut-outs ensure sufficient wearing comfort to see and breathe, while the appliquéd chest piece guarantees a completely successful illusion of Freddy Krueger. We recommend the Freddy Krueger Hat Deluxeand the Freddy Krueger Pullover XL.

The article is a costume accessory for adults and not a toy. Not suitable for children under 3 years. May contain small parts that can be swallowed - danger of suffocation. Keep away from fire and open flames.