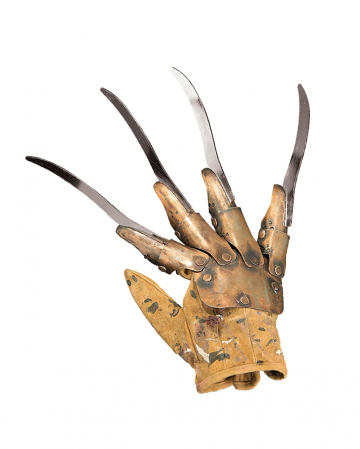 Sensational Freddy Krueger glove made of metal as a faithful replica

Get the Freddy Krueger Metal Glove Deluxe to the dreaded killer.Freddy, aka the Springwood Slasher from the US hit movie A Nightmare on Elm Street, was one of the most famous serial killer of US cinemas.Properly famous Freddy Krueger was his sadistic murder tool he had been working from an old leather work glove, copper pipes and sharp steak knives together.The brutal, razor-sharp blade gloves, reminiscent of a claw, is since his trademark and keeping countless teenagers to sleep.

The Deluxe version of Freddy Krueger metal glove is made of imitation suede, metal parts and long metal blades, but these are not sanded.With our Freddy Mask and the original Freddy Krueger Pullover Deluxe You're ideally equipped to scare your friends fear and terror!