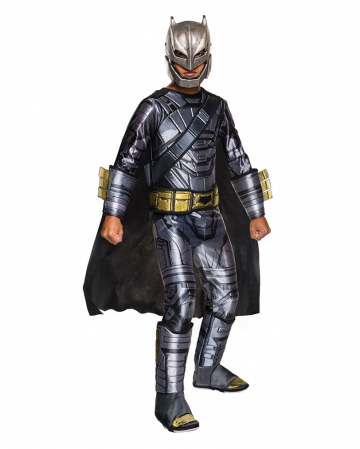 Item #: 25955
❤  Add to wish list
(1)
Reduced from £37.95incl. VAT, plus shipping
UnavailableOrder fast! Only a few items left
Delivery until 11.08. possible**
Available
Delivery until 11.08. possible**
** Only for deliveries inside germany, information about other countries can be found here
Fitting for this:
Add the product directly to your basket by clicking the checkbox

In the ultimate clash between Batman and Superman in the latest DC Comics box office hit, no stone is left unturned. To stand up to Superman's superhuman strength, Batman wears an armored suit. Based on his template, this is now available as a DLX Batman armor children's costume. So you are well prepared for a brilliant appearance at Halloween, carnival and the next Comic Convention.

The multi-piece DLX Batman Armour Child Costume consists of a fully printed jumpsuit with muscles, a cape, bracers and boot covers, both foamed, and a half mask and belt. The imprint of the jumpsuit resembles the grey armor from the movie, as does the steel-grey Batman vinyl mask. The equipment belt of this Batman children's fairing is golden yellow and shows the new bat symbol in the middle. Even for the very little superheroes we have fancy disguises in our program such as the Superman Baby Costume 5-pieceand Batman Toddler Costume.