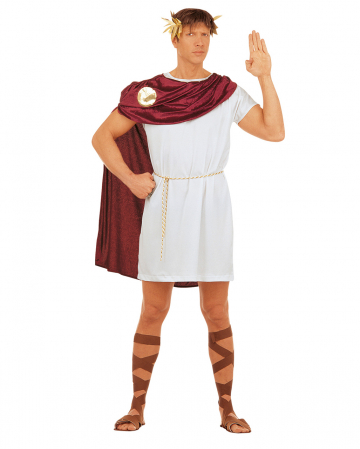 Antique Roman costume for men from 300

With this sexy carnival costume of the Roman hero Spartacus you are the hero of women. Spartacus was a Roman slave and gladiator who he made famous as the leader of a slave revolt named after him.

The gladiator costume consists of a white tunic, the red velvet cape with golden decoration, a golden-white cord as belt and the sandals made of imitation leather. The costume is completed with the golden laurel wreath of the winner. You can find more ingenious carnival costumes from the ancient world like the Greek goddess Persephone Costume Sor the Egyptian Pharaoh Tutankhamun Costume. Sone in our shop.

The article is a costume for adults and not a toy. Not suitable for children under 3 years. May contain small parts that could be swallowed. There is then a danger of suffocation. Keep away from fire and flame.