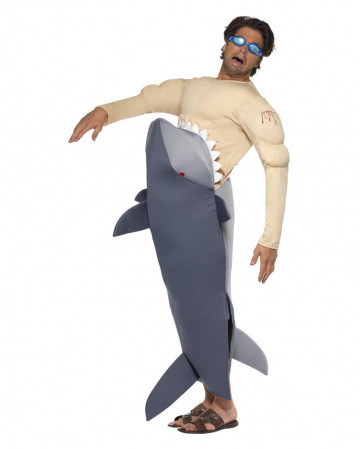 A scene, as they had once done the great Spielberg: a man floating in the sea, is mercilessly devoured by a shark.Before animal brutality and the desperate struggle of the victim, for survival, the sea froths bloody.Our shark attack costume makes these scenes rise again to be worn as a large animal horror fun in costume on Halloween or carnival figure.

The funny shark attack costume consists of the body suit, which consists of the shark and the torso of a man who was stuck in rudely said killer of the seas.Since it is the victim of the shark is a swimmer, includes a blue swimming goggles with the costume features.The shark costume is simply pulled over the head, so that the feet protrude at the tail end.For the special extra authenticity to a shark attack a good portion Film Blood / FX Blood 240 ml worry, but be careful, because a Shark Costume is known, can smell blood many kilometers away.

Caution: This item is a fancy dress for adults and is not a toy.Not recommended for children under 3 years.Can contain small parts that could be swallowed - suffocation.Keep away from fire and open flames.