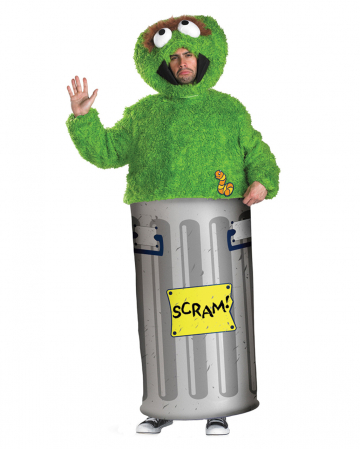 The funny Oscar carnival costume certainly causes a stir and is the party hit for every children's birthday or children's carnival. One of the main protagonists who repeatedly caused a stir among the conservative politicians was Oscar Grießkram, who lives in a garbage bin in front of the house on Sesame Street.

The Sesame Street was one of the most successful children's programs on American television and was broadcast in 1973 under protest of the Bavarian radio (who else?) In Germany. The broadcast was in the beginning in the 3. Banished channels and had to fight so practically only the place in the main program of the providers. Oscar loved garbage and made no secret of it, was probably one of the first who thought of recycling and would be practically the hero today! The super beautifully made and unusual Oscar costume of the garbage monster is made of green plush and gray printable garbage bin made of fabric, as well as the green character head with the big eyes, also made of plush fabric.