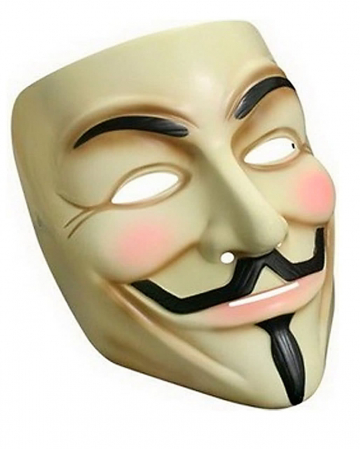 Licensed Guy Fawkes mask from the movie "V for Vendetta"!

"V for Vendetta" (Italian Vendetta: Blood Vengeance) is a film adaptation of the eponymous comic by Alan Moore and David Lloyd from the year 2006. The film was produced by Joel Silver, the screenplay was written by the Wachowski brothers, who through the matrix Trilogy became famous. The film takes place in futuristic London, and the story follows V, the masked freedom fighter Guy Fawkes with the vendetta mask, who simultaneously pursues personal vengeance in the fight against the authoritarian state and prepares a social and political overthrow. V for Vendetta was a big surprise at the box office and caused some unrest and discussions about terrorism in some countries. With the V for Vendetta mask of the modern Robin Hood and freedom fighter Guy Fawkes you are sure to cause unrest - especially when several people wear the same mask! Really scary!

The simplicity of the character and its simple features provide the V for Vendetta mask for a perfect and easy to realize Halloween costume. With the exception of the original V for Vendetta mask, you probably have the rest of the costume, the black garments, already at home.