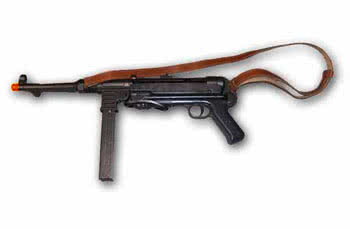 Item #: 15935
❤  Add to wish list
(0)
Reduced from £169.00incl. VAT, plus shipping
UnavailableOrder fast! Only a few items left
Delivery until 20.09. possible**
Available
Delivery until 20.09. possible**
** Only for deliveries inside germany, information about other countries can be found here
Fitting for this:
Add the product directly to your basket by clicking the checkbox

The precursor of the MP 40 Schmeisser was also known as the Spanish Civil War, the end of the 30s of the last century used.Once this had been proven here, it was for the German Officer army coat M / L developed and improved.

The very realistically shaped, but not functional replica of the submachine gun MP 40 black-lacquered metal and plastic is about64 cm long, before retracting the shoulder support even 83 cm, having a clamping lever, a trigger and a separate, removable cartridge magazine and a metal strap made of genuine leather.The MP 40 replica is a unique prop and therefore extremely popular with television recordings and on stage.

The Maschienenpistole is not functional and can not be converted to a real gun!