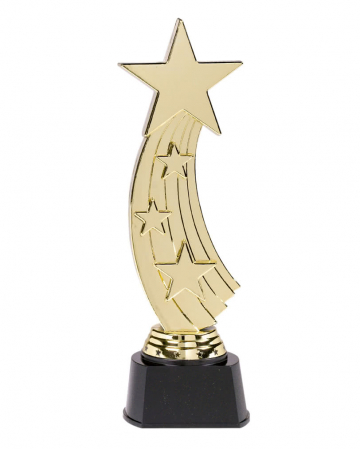 Item #: 8801860
❤  Add to wish list
(1)
Reduced from £2.99incl. VAT, plus shipping
UnavailableOrder fast! Only a few items left
Delivery until 22.01. possible**
Available
Delivery until 22.01. possible**
** Only for deliveries inside germany, information about other countries can be found here
Fitting for this:
Add the product directly to your basket by clicking the checkbox

Golden Shooting Star for my award

And the Star Award goes.,,! Who does not want to see so are a unique distinction in addition to his winning trophies of the local bowling club? Withhold for your next Halloween party a costume contest from and bring the Star Award Trophy to the most unusual, best and most spectacular costume event.

The Star Award trophy is a golden award that spectrum can be used for any occasion.The trophy represents a shooting star in its tail to large and small stars are.The golden shooting star is based on a same-colored pedestal decorated with a ring of small stars.The Trophäenfuß is black and flattened obliquely at one point.There you can, for example, attach a small blackboard with a dedication for the best Halloween costume party.While the Star Award is issued for the best disguise, you can the Sexiest Costume Trophy provide for the sharpest Witch of the evening.On Party sign Zombie Hand points the way to celebrate your guests.

Warning: This article is not a toy.Not recommended for children under 3 years.May contain small parts that could be swallowed - suffocation.Keep away from fire and open flames.