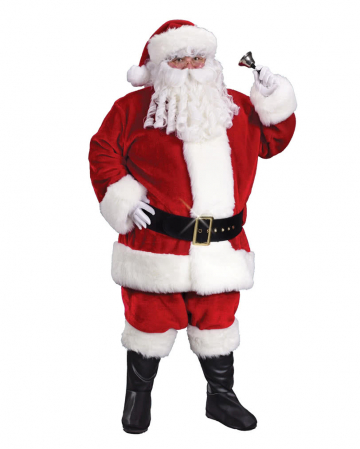 Santa Claus is coming to town.Who does not know, the American counterpart to the German Nicholas or Santa Claus.He comes in the night of 24thto 25thfly into December in his sleigh pulled by reindeer.Santa Claus then comes in Santa Claus costume through the chimney, orFireplace to bestow rich in the apartments to the good children.

Our Santa Claus costume is made rich, heavy, scarlet plush velvet, the jacket is opulently trimmed with white faux fur, as well as the boot tops made of black leatherette.The Santa Claus jacket is with the zipper, which is cleverly hidden behind the faux fur, closed and cinched with a black patent leather belt with real brass-colored Metallschlisse.Completing the Santa Claus Santa Claus Deluxe costume with red plush velvet trousers and the obligatory stocking cap, which is like the coat, trimmed with white faux fur and a pair of white gloves.Santa Beard And Wig , Glasses and bell not incl.