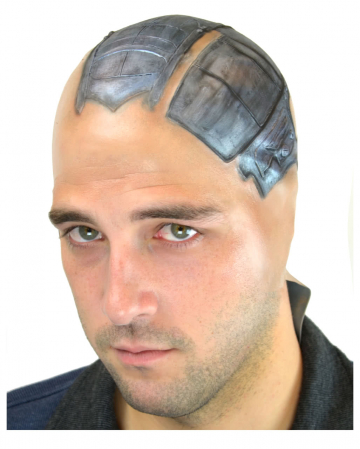 Order now the robot-lax film and make you a special science fiction horror make-up effect that could come directly from a professional make-up artist. With the robot lax film of latex, you can turn into a dangerous terminator with few manipulations, or alien with a metal plate motif. With the robot lax film you have a special makeup effect, which is particularly suitable for your appearance as an alien. Without your visible hair and with painted metal plates as a look you can hardly be recognized!

The robot lax film is made of high-quality, soft latex and is applied as a pre-dyed latex application simply over the own head and then attached to the edges with Mastix skin glue or liquid latex on the skin. In order to get your own hair easier under the balding film, these before best with hair gel smoothing. Due to its soft texture, the robot lily film adapts perfectly to the head shape. Mastix Hautkleber klein Not incl. With Blood Gel / Blood Gel 30ml and Film Blood / FX Blood 30ml You give your robot alien cloak, a bloody sci - fi look and fierce terminator look!

Warning: The product contains latex. A test for allergic skin reaction in the arm flexion is recommended as latex can cause temporary reddening in sensitive skin. If there is a violent redness during the test in the arm flexion, we advise against using the latex application.