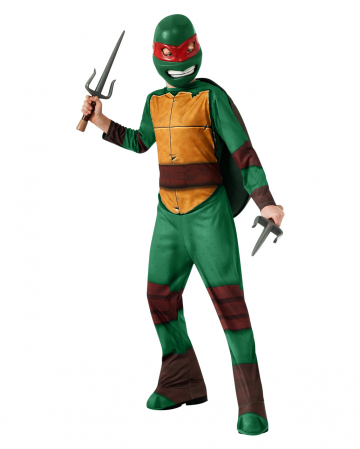 The brave turtles with the cool ninja moves and the big snout are the heroes of the hour. Go to school with the Raphael TMNT children's costume to the children's carnival and save your friends from the attack of camel thieves! As the hero of the cult cartoon series and the famous film series, you always have a relaxed saying on your lips and a good idea in mind. Not only the neighboring children will be enthusiastic about your appearance as a brave super turtle. As a sporty turtle, you'll also ensure fun and action until the rind crashes at the children's birthday party with its disguise motto. Or until the pizza's ready. Because besides the courage and the loose mouth you also have the love for pizza together with the teenage mutant Ninja Turtles.

The original Raphael children costume TMNT is the ideal costume for little heroes. The licensed fairing set consists of three parts. First, put on the green jumpsuit with the orange belly. The legs look as if they were covered with brown knees and beige wall wraps. Just like Raphael in film and series. With the mask you put over your head, you will become a heroic turtle in no time. It is held in the typical Turtles green and around the eyes is the painted red bandage that characterizes Raphael. Now just put on the padded back shell and the brave turtle is ready. In the shop you will find more articles for real Ninja Turtles fans. For example, you can use the Ninja Turtles Michelangelo Child Mask to turn yourself into one of the other characters.

Attention: The article is a costume and not a toy. Not suitable for children under 3 years. May contain small parts that may be swallowed - risk of suffocation. Keep away from fire and open flames.