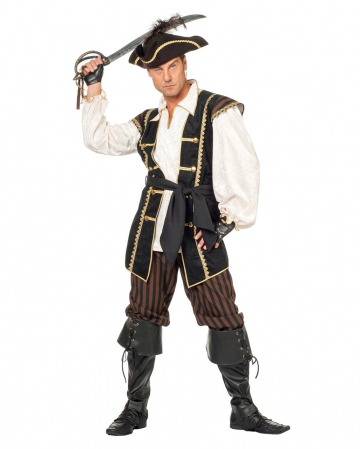 Enter the carnival party as a cool buccaneer. With the Pirate Commander Lord costume you will become the irresistible pirate of hearts. Stylish, casual and charming, your weapon is your charisma and your casual disguise. And the danger that emanates from you as a dangerous pirate does not seem threatening, but rather attractive. Therefore the hearts fly to you on the carnival party or the motto party only in such a way. All you have to do is grab her and stand in your treasure chest.

At carnival, you make fat prey in that disguise. The Pirate Commander Men costume underlines your casual charisma, with which you can make an impression at any costume party. Especially in the loose brown-black striped trousers, which do not pinch even when dancing, you are not to be disturbed at carnival. The top's really got it in it. It looks like a typical black pirate vest with a shirt. Simply pulled over, you'll become the irresistible pirate commander in no time at all. Only the smart belt put on and off we go to the boarding of the beer counter. And if someone comes to you stupid, you just pull the Pirate Rapier Black. Ahoy there!