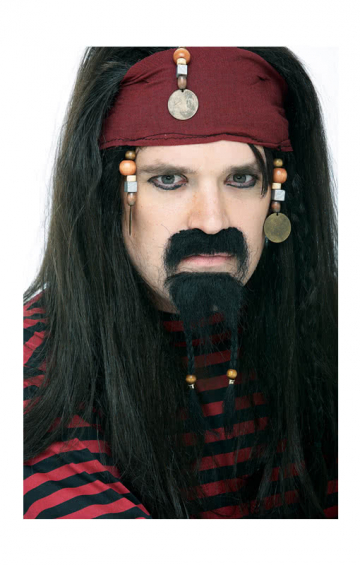 Only a pirate with beard is hard

The famous Blackbeard, actually Edward Teach, had his name because of his magnificent beard. He liked to decorate it with burning lunts, to scare the opponents and thus to be able to hijack ships without fighting. Other pirates had less voluminous facial hair and had to do without such tricks. But in a generally smooth time a dense chin-beard with braids and pearls combined with a thick Schnauzer made the impression of wildness and audacity.

The pirate beard set consists of a mustache, a chin beard with two braids, at the ends of which wooden beads are braided, and several strips of beard tape. Instead of the adhesive tape you can also attach the beard with other glues. For this purpose the Mastic & Make Up Remover suitable. The beard fits perfectly to costumes like Daring Pirate Costume XL . Caribbean Pirate Costume Deluxe and buccaneer costume ,