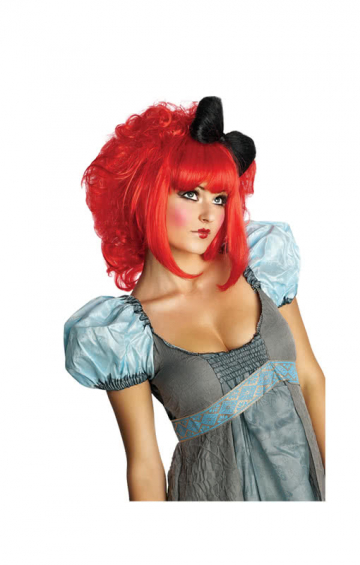 In the typical hairstyles of the manga and anime Stars always helps one of our manga wigs.The Japanese manga drawn comics, and anime, the animated films and series are incredibly popular in Germany.In Cosplay and Visual Kei meeting thousands come in costumes of their favorite characters.The elaborate outfits of anime conventions are often sewn yourself what is so time-consuming than a manga put on wig.

The Manga Wig Red is a wig that is front cut as pageboy and a straight pony has.The front section of the wig is styled smooth.At the back of the head are curly hair auftoupiert.The highlight of the manga wig is a black ribbon on the pony, which is reminiscent of the typical look of some Lolita Anime Stars.Together with a Cosplay Costume 2 pieces or a Gothic Lolita dress with matching hairband and Manga Contact Lenses Blue You're well equipped for the next manga fan meeting.