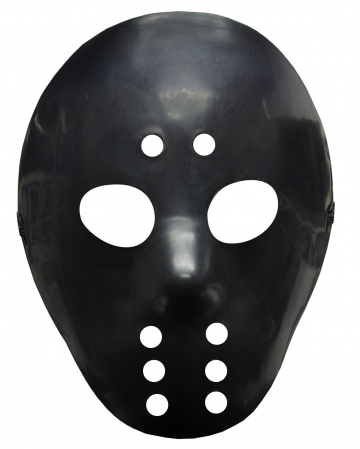 Masquerade as a Halloween serial killer with the black hockey mask

With the Jason Hockey Mask Black you will shock on Halloween as a famous serial killer. Jason Voorhees is not to be trifled with. Especially when he's got a black grudge. As a killer from the twelve Friday of the 13th films so far, Jason's has caused fear and terror, whether Camp Crystal Lake, New York or now Castrop-Rauxel, the serial killer conquers the world. Wearing a hockey mask and Killer Machete Silverbecome the creepy heir to his bloody machinations.

The Jason Hockey Mask Black is the ideal mask for your serial killer costume. The half mask is made of light plastic and holds with an elastic band on your head. No one will recognize your face when you become a serial killer with this Halloween mask. The mask looks like the typical hockey mask that Jason Voorhees wears in the movies. As a darker version this killer mask is black instead of white.

The article is a costume accessory for adults and not a toy. Not suitable for children under 3 years. May contain small parts that can be swallowed - danger of suffocation. Keep away from fire and open flames.