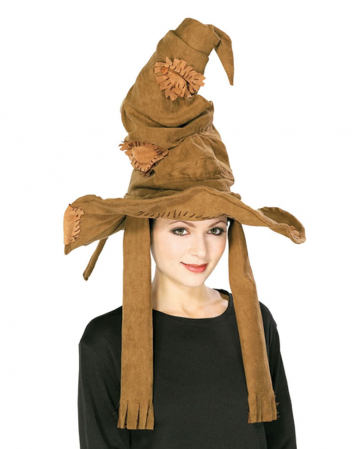 The matching hat, originally called Sorting Hat, is a really old and rotten magic hat that can do wonders. The shattered hat once belonged to school founder Godric Gryffindor. The magic hat serves as a way whiteness for all newcomers of the magic school and sorts them according to their character and talents. When one of the first years puts on the old magic hat, he gets his house assigned to him, where he may go into the magic apprenticeship. Depending on the strength and weakness of the young sorcerer's apprentices, this may be the homes of Slytherin, Ravenclaw, Gryffindor and Hufflepuff. As is well known, Harry Potter was originally supposed to come to the crafty Slytherins, but the crafty hat bowed to Harry Potter's request and sent him to the Gryffindors.

The Magic Hat of Harry Potter is an Original Harry Potter Licensed Item is made of super soft brown velvet fabric, with small pieces of fabric as patches and beautiful stitching. The "talking" hat in the German cinema translation is just like that , but does not really speak! and fits children from 12 years and most adults.