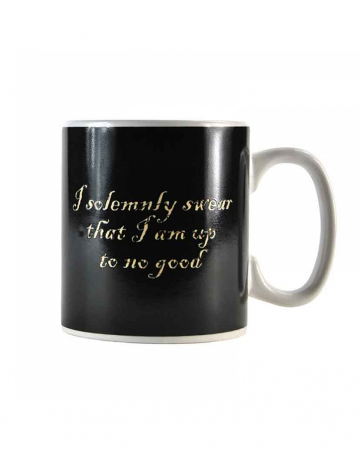 A good start to the day starts for every fanatic fanatic's fanatic with a sip of the Harry Potter Marauder's Map Cup. The coffee mug with thermo effect comes in a magical gift box and is also a great idea as a present for birthdays and Christmas!

The licensed Harry Potter Marauder's Map mug is made of high-quality ceramics and has small footprints on one side, and on the other side is the well-known lettering "I solemnly swear that I am up to no good", which in J. K. Rowling's novels unleash the magic of the card. If you fill in the Harry Potter cup of hot liquid, prints and footprints disappear, and instead reveals the map that shows the magic school Hogwarts and the nicknames of Harry's father and his friends. At the bottom of the cup is "Mischief Managed," the spell that restores the map to its original state.

The article is not a toy. Not suitable for children under 3 years. May contain small parts that can be swallowed - suffocation. Keep away from fire and open flames.