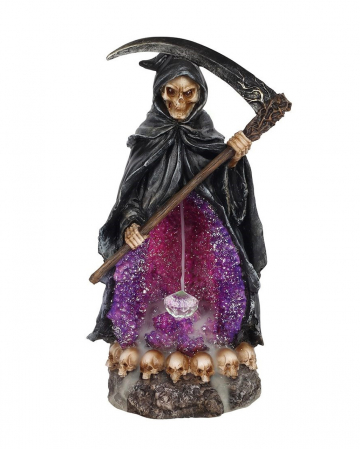 Creepy grim reaper as a home accessory with smoke effect

The Grim Reaper Backflow Incense Cone Holder with Light is an ingenious decoration for Halloween and Gothic fans. Mystical smoke, a grinning grim reaper and an impressive scythe, what an eye-catcher on your shelf or table. Place an incense cone with backflow function (Backflow) in the hood of the Grim Reaper and watch the smoke gently disperse from the center of the open cowl. It's a spectacle that soothes and excites the viewer at the same time.

The Grim Reaper Backflow Incense Cone Holder with Light is more than just a decorative figurine. The extraordinary incense cone holder shows a grim reaper in a dressy outfit. He wears a black cape, whose inner lining shimmers purple. His skull grimace looks confidently out from under the hood. He carries a large scythe and around his feet are the skulls of his victims. Accentuated by glittering "gemstone" elements, the incense cone holder creates a fantastic smoke effect, which can be further enhanced by a switchable LED light. The deco figure is operated with 2 AA batteries and an on/off switch.

Not suitable for children under 3 years. May contain small parts that can be swallowed - choking hazard.