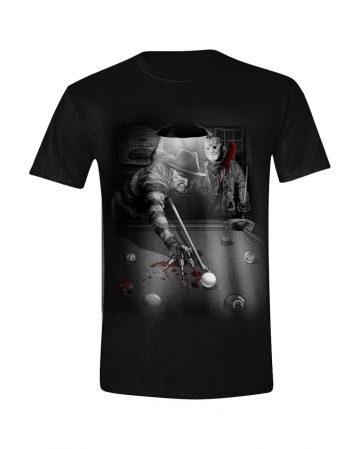 Get a cool fan article about Ronny Yu's cult horror movie with our Freddy vs. Jason - Pool T-Shirt! The shirt with Jason Voorhees together with Machete as well as Freddy Krueger with claw hand playing billiards is an absolute must-have for all fans and collectors!

The Freddy vs. Jason - Pool T-Shirt captivates with its cool design. Appropriately kept in black, the fan shirt in grey gradations shows Jason with his characteristic ice hockey mask and machete together with Freddy Krueger including a typical floppy hat and claw hand at a game of pool. Even more Freddy and Jason fan articles like the Funko Pint Size Heroes Horror Figure and that Camp Crystal Lake Shield we also have at Horror-Shop.com!

The article is for adults and not a toy. Not suitable for children under 3 years. May contain small parts that may be swallowed - danger of suffocation. Keep away from fire and open flames.