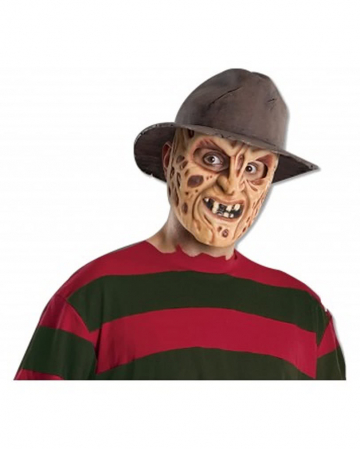 Item #: 25637
❤  Add to wish list
(1)
Reduced from £14.90incl. VAT, plus shipping
UnavailableOrder fast! Only a few items left
Delivery until 28.09. possible**
Available
Delivery until 28.09. possible**
** Only for deliveries inside germany, information about other countries can be found here
Fitting for this:
Add the product directly to your basket by clicking the checkbox

Original Freddy Schlapphut from "A Nightmare on Elm Street"

He is the nightmare of every early tea-girl and knows what the Salsher genre is all about! The talk is of Freddy Krueger, with whose official hat you can dress up at the next Halloween party as a horror icon.

The licensed Freddy Krueger hat Delxue is equipped with numerous fire holes and reproduces the look of the brown Freddy Schlapphut. In order to complete your "A Nightmare on Elm Street" -look, we also have the Freddy Krueger Latex MaskFreddy Krueger Slouch And ours Freddy Krueger metal glove Supreme ,

Attention: The item is a costume accessory for adults and not a toy. Not suitable for children under 14 years. Can contain small parts that can be swallowed - danger of suffocation. Keep away from fire and open flames.