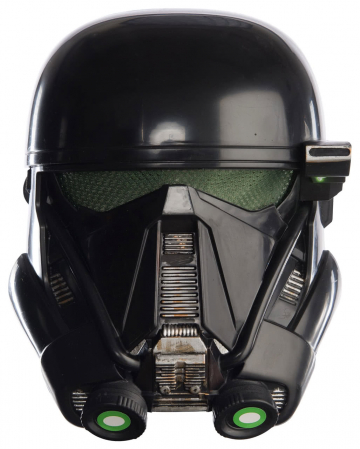 Item #: 27632
❤  Add to wish list
(1)
Reduced from £5.95incl. VAT, plus shipping
UnavailableOrder fast! Only a few items left
Delivery until 24.09. possible**
Available
Delivery until 24.09. possible**
** Only for deliveries inside germany, information about other countries can be found here
Fitting for this:
Add the product directly to your basket by clicking the checkbox

Cool Star Wars mask for your Roge One costume

For all those who want to appear on the upcoming Halloween celebrations, conventions and war of the stars motto parties as an elite soldier of the Galactic Empire, we have exactly the right costume accessory in our assortment with our Death Trooper children's half mask!

The Death Trooper children's half-mask corresponds down to the detail of the template from "Star Wars - Rogue One". The gloomy black of the Death Squad mask, combined with stylized tubes, switches, and cables, instantly creates a frightening sight. A net placed behind the generous eye holes makes it look as if you only had dark caves instead of eyes behind the Star Wars half mask. Foam inserts inside the Death Troopers costume accessories for children prevent pressure points and the Velcro strip can easily be attached to the Rogue One mask. The and the Stormtrooper Kids Gloves ,

Not suitable for children under 12 years. Can contain small parts that can be swallowed - danger of suffocation.