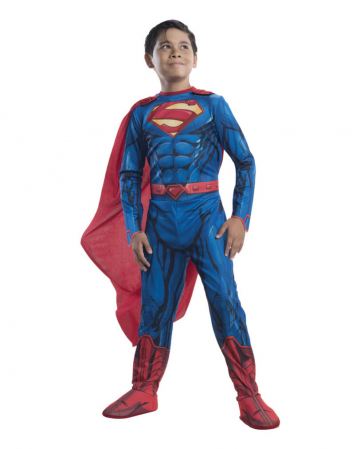 When Metropolis is in danger, Clark Kent abandons his simple editorial job at the Daily Planet and strips off his alter ego to disguise himself as Superman and avert impending disaster from the city and its inhabitants. Become a hero too and ensure the safe transport of candy on Halloween in the DC Comics Superman children's costume.

The DC Comics Superman children's costume is based on the look of the New 52 comic series. Besides the obligatory red cape, the disguise consists of a blue and red suit and a belt. On the chest is the big red S, which logically stands for Superman. Likewise, the muscle contours are printed on the suit and gaiters are sewn on the foot end. The cape is attached to the suit with Velcro strips. Velcro strips on the back close the superhero costume. Together as a team, being a superhero in DC's Superman kid costume is so much more fun, so why not start your own League of Justice with a friend in Batman Child Costume Deluxeand your superdog crypto in Superman Dog Costume M.