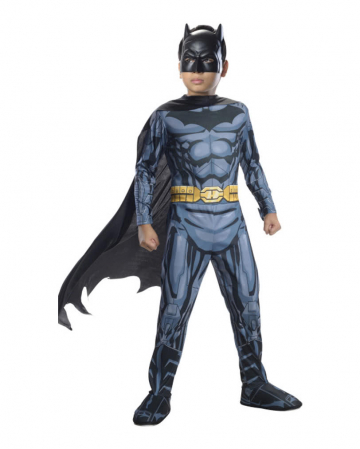 Licensed superhero outfit to strip as a dark avenger by night

When the sun goes down, the business and playboy Bruce Wayne traded his pinstripe suit against the Bat-suit to patrol as a dark avenger in Moloch Gotham City, so that the citizens of that city can slumber peacefully.In the DC Comics Batman Child Costume you yourself once in the role of Batman go to spend gloomy Halloween night or even to show to comic book conventions your ties to the superhero world.

The original licensed DC Comics Batman costume consists of a jumpsuit, a cape and a belt, and a half-mask.The Batman jumpsuit has a majority gray, while black shades highlight the toned body of Batman.It includes the Batman Children trim to a Velcro closure at the back.At the foot black boot covers are sewn.Also black are the cape and Batman half mask, which is attached by rubber strap behind the head.is Finally even the replica of the famous equipment belt mentioned, which is also equipped with Velcro.In DC Comics Batman costume you can easily with the Batman Utility Set equip and as Halloween in your sweet booty Batman Bat Logo Backpack carry back into the domestic Batcave.

Note: The item is a costume and not a toy.Not recommended for children under 3 years.Can contain small parts that could be swallowed - suffocation.Keep away from fire and open flames.