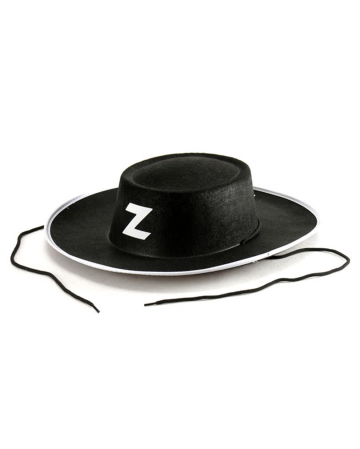 Model for these black Zorro hat made of felt, is the infamous cowboy hat Mexican Robin Hood.The folk hero Zorro is a fictional, classic cult and action figure.The actual story takes place in California the 19th century.Century, during the Spanish colonial rule.Zorro takes a long time unendecktes double life.During the day he leads an inconspicuous life as unassuming and cowardly nobleman Don Diego de la Vega, he turns at night in Zorro Muscle Deluxe Costume and with Zorro Mask In Leather Look avenger of the people.Here his outstanding swordsmanship him come in his vendettas, benefit, as a trademark, he leaves his opponents always incised Z (Zorro).

The elegant Zorro hat for adults with the white Z as a badge has a white brim and two black cords to fasten under the chin.Zorro is equally popular with adults and in children as Costume and thus the hit for Carnival and Carnival.