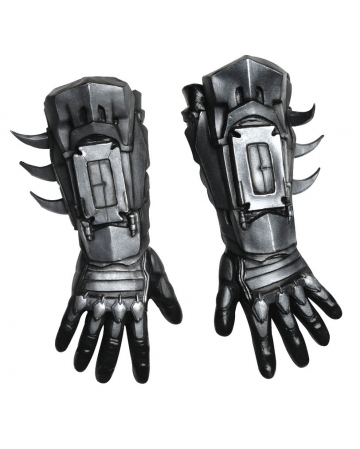 Who does not dream of being once dressed like his great role model from the Batman comics or the computer game series. So dress up for Halloween and carnival as Batman in modern garb with the Batman gloves. As a licensed "Batman: Arkham" fan item, the gloves also look great in your Batman devotional collection.

The two Batman gloves DLX are from the "Batman: Arkham" fan series to the successful computer game series. Each of the two steel-gray gloves is similar to the original from the computer game and impresses with its detailed surface design. While the Batman gloves DLX are made of gray-colored natural rubber, the ankle thickenings are silver-colored. The ellenlangen gloves are ideal to make them around for Halloween Batman Muscle Costume XL to wear. With us you can find more panels from the DC universe, including the cool one Original Arrow Costume ,

Warning: This item is a costume accessory for adults and is not a toy. Not suitable for children under 12 years. Can contain small parts that can be swallowed - danger of suffocation. Keep away from fire and open flames. This product contains latex. May cause allergic reactions to certain persons on contact.