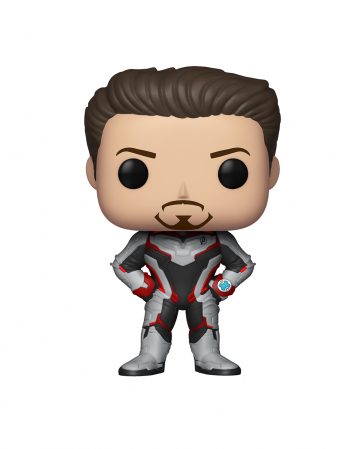 Collectors figure from the Marvel cinema hit as gift article

With the Avengers Endgame - Tony Stark Funko POP! character you will make every Marvel fan freak out. The funny superhero, who leads the Avengers in the fight against Thanos as Spiderman's mentor, is one of the absolute favorites in the Marvel universe. There's no question that every Avenger disciple immediately strikes somersaults with joy when he sees little Tony Stark with his big head. The ingenious Funko POP! figure is also simply great on the shelf or on the desk.

The Avengers Endgame - Tony Stark Funko POP! figure is made with the typical style of Funko Pop! Figures, big head and small body, simply irresistible for anyone who loves the adventures of Iron Man, Thor and Co. The big eyes of the little Marvel superhero look so determined that you immediately feel safe. With his hands on his hips, he is ready to delight your heart as a decoration. The original merchandise figure from the house Marvel is made of resistant vinyl. More cool fan articles to the Avengers movies or costumes to Iron Man like that Iron Man maskyou can find in our shop.