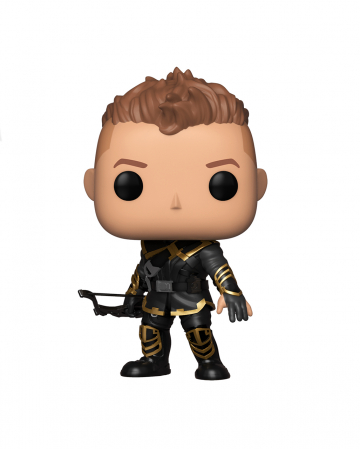 Collectible figure from the Marvel Cinema hit as a gift item

With the Avengers Endgame - Hawkeye Funko POP! Bobblehead character, you make a Marvel fan a huge joy. The Avengers not only beat everything you've ever seen in the cinema. Iron Man, Spiderman, Thor and Co. make the hearts of the fans beat faster. Cooler superheroes have probably never seen. And also as a cool Funko POP! Figure makes little Clint Barton alias Hawkeye really good on the shelf of an Avengers fan.

The Avengers Endgame - Hawkeye Funko POP! Bobblehead figure is with the typical style of Funko Pop! Figures, so big head and small body, just irresistible to anyone who loves the adventures of Iron Man, Thor and Co. The big eyes of the little Marvel hero look so determined that you feel safe immediately. The small bow that the Avenger holds in his hand completes the superhero look. The merchandise figure from the Marvel Universe is made of durable vinyl. More cool fan articles from Funko POP! as the Horror Movie Funko Pop! Ballpoint is available in our shop.