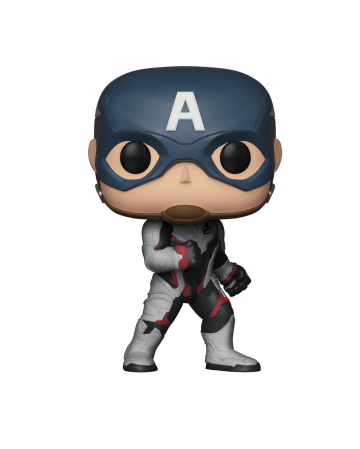 The Avengers Endgame Captain America Funko POP! Figurine is an ingenious gift item for Marvel fans. The First Avenger stands in the fight against Thanos his husband. Together with Iron Man, Black Widow, Hulk and the Guardians of the Galaxy he gives everything as usual. And as a deco makes the Marvel superhero just fantastic. A front-line fighter, Steve Rogers, aka Captain America, belongs to every well-stocked collection of Avengers movie supporters.

The Avengers Endgame Captain America Funko POP! Figure is with the typical style of Funko Pop! Figures, so big head and small body, just irresistible to anyone who loves the adventures of Iron Man, Thor and Co. The big eyes of the little Marvel hero look so combative that you can feel safe immediately. Thanks to his blue half mask, you also know which superhero you are dealing with. The merchandise figure from the Marvel Universe is made of durable vinyl and measures about 10 cm. More cool fan articles like that Captain America Cup ,