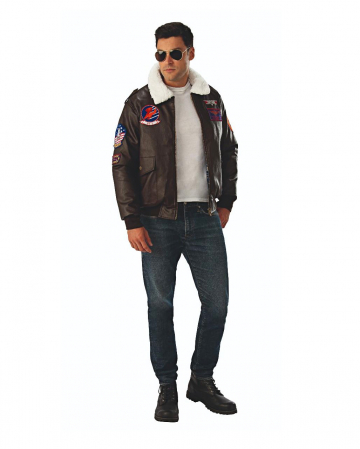 With the action movie "Top Gun" from 1986, film producer Tony Scott landed a real box office hit. It stars the elite fighter pilot candidate, Pete "Maverick" Mitchell, played by none other than action legend Tom Cruise. He impresses the audience not only with his daring way of flying, but also with his casual, rebellious style. With the Top Gun Deluxe Bomber Jacket you slip into the role of the ambitious fighter pilot Maverick and make a lasting appearance at the next costume party.

The Top Gun Deluxe Bomber Jacket features a brown imitation leather and a white fake fur collar. The retro bomber jacket is decorated with contrasting patches on the front and on the sleeves. You get the Top Gun costume accessory in size One Size (48-54) and XL(56-58). Also check out Top Gun Costume for adults and wear accessories such as pilot glasses and a matching wig.

Attention: The article is a costume for adults and not a toy. Not suitable for children under 3 years. May contain small parts that can be swallowed - danger of suffocation. Keep away from fire and open flames.