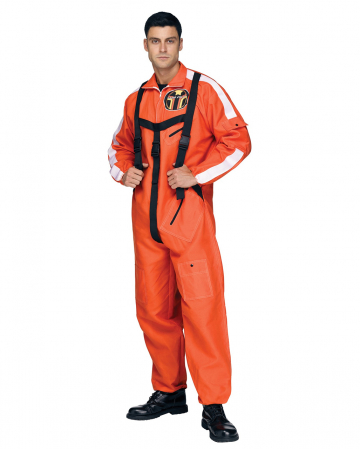 Item #: 29503
❤  Add to wish list
(0)
Reduced from 29,99 €incl. VAT, plus shipping
UnavailableOrder fast! Only a few items left
Delivery until 21.06. possible**
Available
Delivery until 21.06. possible**
** Only for deliveries inside germany, information about other countries can be found here
Fitting for this:
Add the product directly to your basket by clicking the checkbox

The Star Fighter Pilot Costume is a sci-fi mens costume for theme parties, Halloween & carnival. The Orange Pilot Costume Jumpsuit is the perfect stars warrior costume for a futuristic appearance. The costume is in One Size (M / L), XL size available and made of soft fabric. A fastened black belt and white applications on the arms make for a cool uniform look.

Attention: The item is an adult costume and not a toy. Not suitable for children under 3 years. May contain small parts that can be swallowed - suffocation. Keep away from fire and open flames.