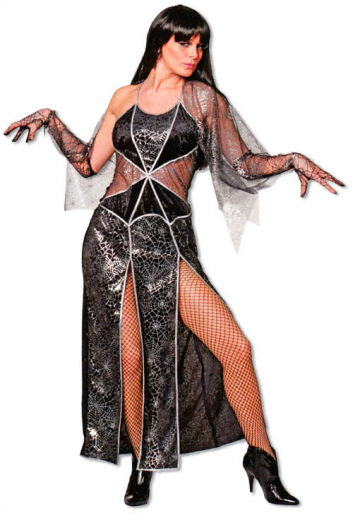 With this costume you can feel like Jessica Drew in the "Spider-Woman" tv series.

In an attempt to save Jessica's life, her father injects her with an experimental serum based on spiders' blood which turns her into Spiderwoman, a woman with superhuman powers. Like a spider she is able to adhere to walls and twist sticky spider threads. She is even able to fly.

In 1991 the tv series was first broadcast in Germany and has had 16 episodes since. Every woman would love to have superhuman powers. Well, our Spiderwoman Costume is a good start...the super powers might come later. The costume is a black velvet dress with silver-coloured spiderweb print in the front and an all black velvet back. Like a neckholder top, the costume has to be tied in the neck. Two big pieces of mesh cloth are attached to the neck in order to cover the arms. They are to be tied to the wrists by means of silver strings in the style of wing-line sleeves. The top of the dress is made of black velvet, some parts of it with silver cobweb print, and mesh cloth with cobwebs. All of it silver trimmed and in the style of a spiderweb. The bottom part of the dress is made of black velvet with silver cobweb pattern. It features two long slits in the front which emphasize your sexy legs. Our Model Wig Black and the Fishnet Tights will add the finishing touch to your outfit and no one will be able to tell you from the real Spiderwoman.