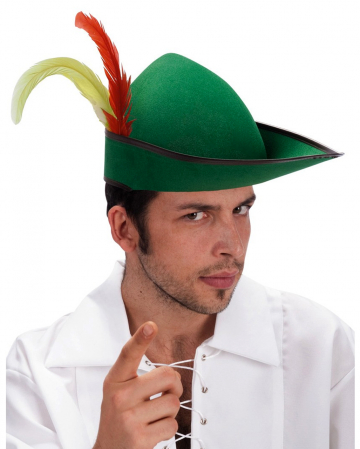 The Robin Hat is known from numerous ballads of the heroic Robin Hood, who robs the nobles and clergy and distributes the stolen gold to the poor. The Robin figure has been described in many stories and films and thus became a cult figure, also for carnival and carnival. The pointed hat of the hero in tights is the perfect costume accessory for your Robin Hood disguise and gives it the characteristic Robin look.

The Robin Hood hat is a green pointed hat with a diameter of about 57 cm and two pretty feathers in red and yellow. The medieval hat is made of felt and has an upturned hat brim, which is framed at the end with black imitation leather. The beautiful Robin Hood hat is also available as a brown version Robin Hood Middle-aged Spitzhut and can be perfectly Robin Hood Costume combined with it;