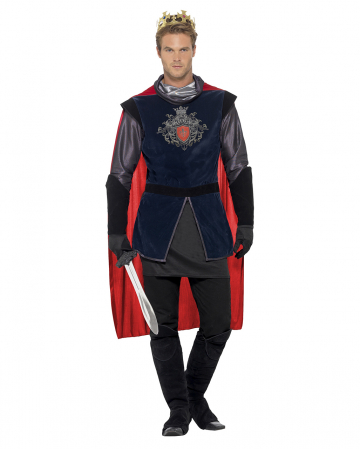 Item #: 23875
❤  Add to wish list
(3)
Reduced from 29,95 €incl. VAT, plus shipping
UnavailableOrder fast! Only a few items left
Delivery until 08.08. possible**
Available
Delivery until 08.08. possible**
** Only for deliveries inside germany, information about other countries can be found here
Fitting for this:
Add the product directly to your basket by clicking the checkbox

Dark times lay behind Britain, but then came a knight named Arthur.He pulled the mighty sword Excalibur from a stone and was thus named the new King of England.The King Arthur Mr. costume also, you can play Halloween and dress up as a knight of the Round Table at the next LARP event.

The King Arthur Mr. costume consists among other things of a deep dark blue Obergewandung, notice their sleeves by their silvery-black chain optics.The shell stands on through their high quality imprint of a coat of arms in the middle of the chest.A purple cape underlines the royal aspect of the costume, while the black yard-long pair of gloves makes a wonderful completion of outerwear.Also held in elegant black, the boot swabs, which range from above the knee to the instep present.As a special highlight the costume is perfected with a golden crown, including plastic gems.Here, the overcoat knee is cut so that the joint can move freely.A walk with the wife in Enchanted Princess Dress by your estate or a ride on Inflatable hobbyhorse With Sir Lancelot Child Costume. L Nothing stands in the way in the country.

Caution: This item is a fancy dress for adults and is not a toy.Not suitable for children under 3 years.Can contain small parts that could be swallowed - suffocation.Keep away from fire and open flames.