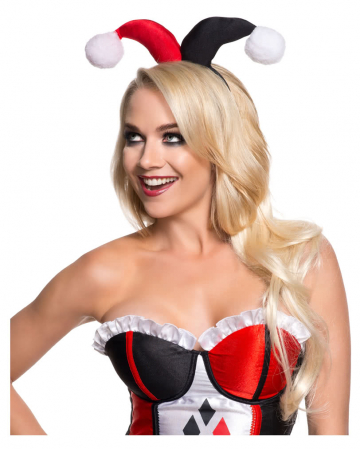 Superhero accessory for a crazy sidekick

While Batman has two partners at his side with Robin and Batgirl, Harleen Quinzel, known as Harley Quinn, is the joker's no-nonsense partner. She often wears a hat with two pigtails as well as some of her distant namesake, the Harlequins. In a slightly smaller form, we now have the licensed Harley Quinn headband as a costume accessory - perfect for Halloween and Comic Con disguises.

The black and red Harley Quinn headband consists of a flexible bow open at the bottom. Attached to it are two lined pigtails of fabric, at the ends of which are white pompons. Just put on the Harley Quinn headband, put on a funky smile and you can already as a Harley Quinn at Halloween parties and Comic Fan Meet the men turn his head.

Attention: The item is a costume accessory for adults and is not a toy. Not suitable for children under 3 years. May contain small parts that can be swallowed - suffocation. Keep away from fire and open flames.