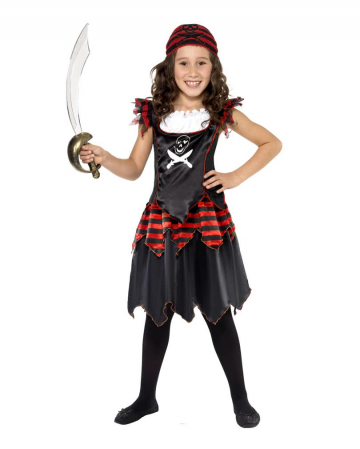 As a pirate Miss dressed in the children's carnival

Dressed as daring pirate Gothicc it goes to the carnival or fancy dress party.Show the pirates and privateers that a young girl dressed as a gothic pirate can conquer a treasure island.With the cheap pirate costume for naughty girl gets many a pirate captain cold feet and lets you freely expresses his pirate gold.

The Gothic Pirate Child Costume is a cheap costume consists of a shirt with skull print and hinted frilly blouse, a skirt in classic pirate look and a pirate bandana with skull motif.now an even more quickly Pirate Rapier Black and on it goes into the Mutiny on the Bounty.

Warning: Not suitable for children under 3 years, contains small parts that could be swallowed.Keep away from open flames.Only suitable for hand washing.