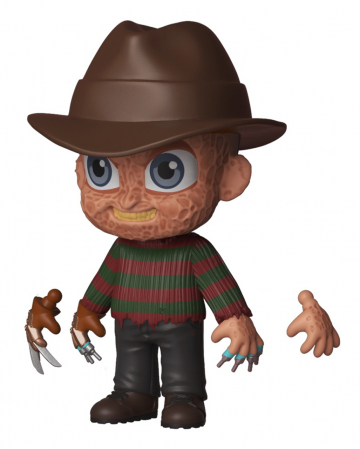 Licensed collector's figurine of the Nightmare on Elm Street Killer

The cruel murderer comes to you in the form of the Funko 5 Star Horror Vinyl figure Freddy Krueger. The scarred bad guy's just waiting for you to bring him into your house so he can do some mischief. Equipped with his famous blade hands, he will frighten the rest of your collection. Complete your merch items with the Funko 5 Star Horror Vinyl character Freddy Krueger.

The delivery includes a Funko 5 Star Horror Vinyl figure Freddy Krueger and embodies the killer from the horror movie A Nightmare on Elm Street. The collector's item is approx. 8 cm tall and consists of vinyl. The fan article is delivered in a matching window box with two exchangeable pairs of hands. To further enlarge your Elm Street collection, you can also use the Freddy Krueger Candy Holder and the Elm Street Freddy Krueger Mug.

Not suitable for children under 3 years. May contain small parts that may be swallowed - danger of suffocation.