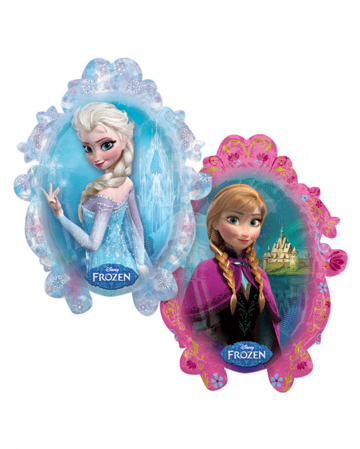 Frozen Supershape balloon with Elsa & Anna as a motive

Frozen has been immortalized as one of the most famous Disney films in thousands of children's hearts.The computer animated film with his touching story of Elsa and her sister is especially popular with girls and is at a premium.With the printed helium balloon you that offers an unusual birthday gift for any fan Frozen.The colorful balloon in Supershape size shows on the one hand and on the other side Elsa Anna as a motive.The beautiful, large balloon is an ideal decoration for your birthday party or as a gift for someone who is dear to you.With the foil balloon Frozen "The Ice Queen" in metal optics you gladden guarantees every comic fan.

The films balloon Disney Frozen consists of two different materials.The first layer is a polyethylene film, the second a vapor-deposited aluminum foil with cartoon print.On our refillable foil balloon the two film characters Elsa and Anna from the film "Frozen" are "displayed.With the licensed Disney Frozen foil balloon you own a beautiful balloon in metal optics, can be filled with helium or air.Helium balloon floats the Frozen for a few days before it can be refilled again.The foil balloon is sent unfilled.Other Frozen products like the Folienballon Disney Frozen Holographic and the Frozen Frozen Elsa Wand are also something for Frozen fans.