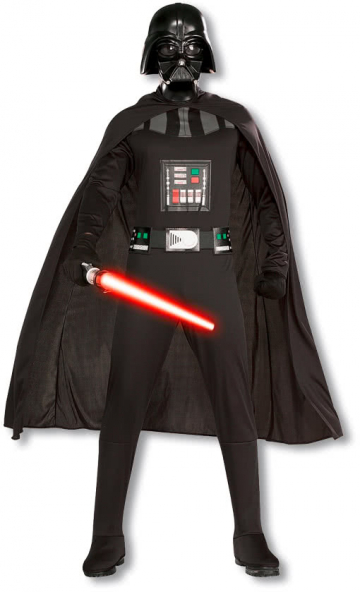 The Darth Vader costume XL you become the Dark Lord of the Sith.Darth Vader, who was working as a slave boy Anakin Skywalker on Tatooine, is found by the Jedi Qui-Gon Jinn and held by the chosen one of an ancient prophecy.Thereupon the young Anakin from Jedi Obi-Wan Kenobi is formed.When he falls in love with Padme Amidala, it is the intention of saving their lives, led by Darth Sidious, who sits disguised as Palpatine in the Senate, on the dark side of power.In a battle with Obi Wan Anakin is seriously injured and left to die.In the course of a life-saving operation he got his black armor created and has been a Sith Lord Darth Vader known.