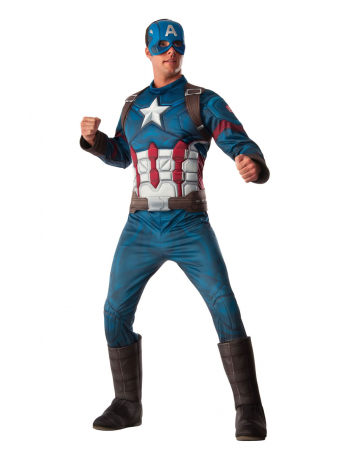 Transform with a Captain America 3D muscle costume into a true super hero from the Marvel comic universe! Fighting against Helmut Zemo and also the discussion with the powerful Iron Man! The First Avenger: Civil War costume is perfect for conventions, carnivals and superhelden motto parties.

The Captain America 3D Muscle Costume is the perfect companion for movies, comics and jumpsuits, belts and masks. The color scheme in the style of the American flag can be found on the Marvel costume as well as the large white "A" as a sign Captain Americas. The jumpsuit of the Captain America costume has a padded upper body, so your chest looks muscular and trained. Shoe-pullers at the lower end of the legs make the impression that you actually have boots on a genius 3D effect. A brown belt is loosely tied around the waist and fits harmonically into the overall picture. The superhelden costume is rounded off by the characteristic half mask, which can be fitted with a drawstring on each head. More comic panels like that Deadpool Men's Costume and the Iron Man Deluxe Costume We also have in the horror shop. com!

Attention: The item is a costume for adults and not a toy. Not suitable for children under 12 years. Can contain small parts that can be swallowed - danger of suffocation. Keep away from fire and open flames.