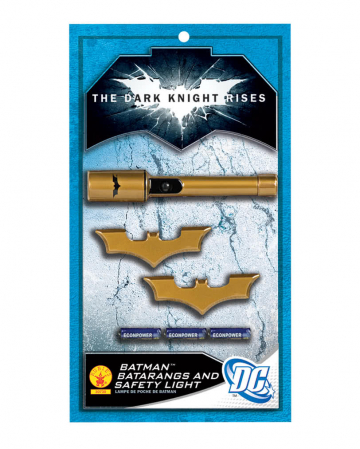 Costume accessories for the Dark Knight of Gotham City

WIth the "The Dark Knight" trilogy gave a new, modified version of Batman entered the film world of DC Comics.Much was unusual for the fans, but the slope of the hero in the bat costume for fancy tools remained the same.This licensed Batman Utility Set you can upgrade your Batman outfit to prepare you for the harsh Halloween nights.

The three-part Batman Utility set consists of a Batsignal flashlight and two batarangs.The gold-colored lamp is about 22 cm long, it has a switch below the lamp housing, which projects the distinctive bat logo.On the handle end is a hook clip-in Bat Belts.The two batarangs formed trilogy in bat logo of "The Dark Knight" and also gold.Equip your Batman with these typical tools Batman costume or Batman costume children and is the dark hero at Halloween or at comic conventions.

Caution: This item is a fancy dress accessory for adults and is not a toy.Not recommended for children under 3 years.Can contain small parts that could be swallowed - suffocation.Keep away from fire and open flames.