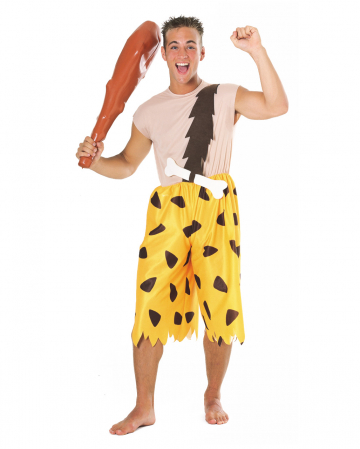 Item #: 31059
❤  Add to wish list
(0)
Reduced from 34,95 €incl. VAT, plus shipping
UnavailableOrder fast! Only a few items left
Delivery until 09.05. possible**
Available
Delivery until 09.05. possible**
** Only for deliveries inside germany, information about other countries can be found here
Fitting for this:
Add the product directly to your basket by clicking the checkbox

Visit the Flintstones family with the Bamm-Bamm rubble disguise

"Yabadabadoo!" An exclamation that makes many people nostalgic and catapults us back to the Stone Age. The cult comic series "The Flintstones" has brought both children and adults daily in front of the flicker box and many have a nice time. The Bamm-Bamm Geröllheimer costume is a caveman comic costume for men, which can be worn for Halloween and Carnival or Mottofete. The Bamm-Bamm Geröllheimer costume is a licensed Flintstones costume for adults. So kick in at the next costume party as a Stone Age man and swing the club! Incidentally, you can order these separately in our online shop.

The Bamm-Bamm Geröllheimer costume is an original Flintstones licensed costume for men. It is available in one size and consists of a one-piece, the lower part of which has the typical leopard pattern. A black cloth sash with bone completes the Stone Age look. The Flintstones costume jumpsuit is made of soft material and can be combined with ours Stone Age lobe combine. Our Fred Flintstone mask completes your costume perfectly.

Attention: The item is an adult costume and not a toy. Not suitable for children under 3 years. May contain small parts that can be swallowed - suffocation. Keep away from fire and open flames.